Fall has officially arrived, but while we are waiting on Mother Nature to catch up, we can explore this area in another way…Just Junkin!

The drive north along the Lookout Mountain Parkway toward beautiful Desoto State Park can be long, but it is filled with gorgeous scenery, no matter the time of year, and also a brief look into what life is like in Fort Payne, Alabama. Rolling green pastures, quaint country cottages, and a giant metal dinosaur. Wait, what? A giant metal dinosaur, did you read that right? Yes, you did in fact read that right. In the Fischer Crossroads area there is a giant metal dinosaur that can be seen smiling at you from the side of the road. Don’t be alarmed, this is just the work of local junk artist Ekim Snaggog. 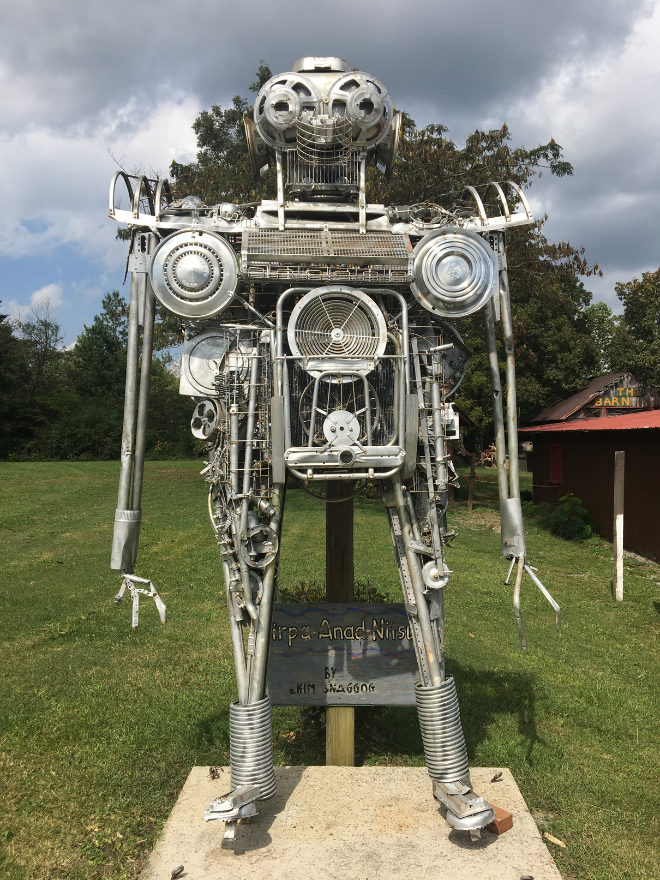 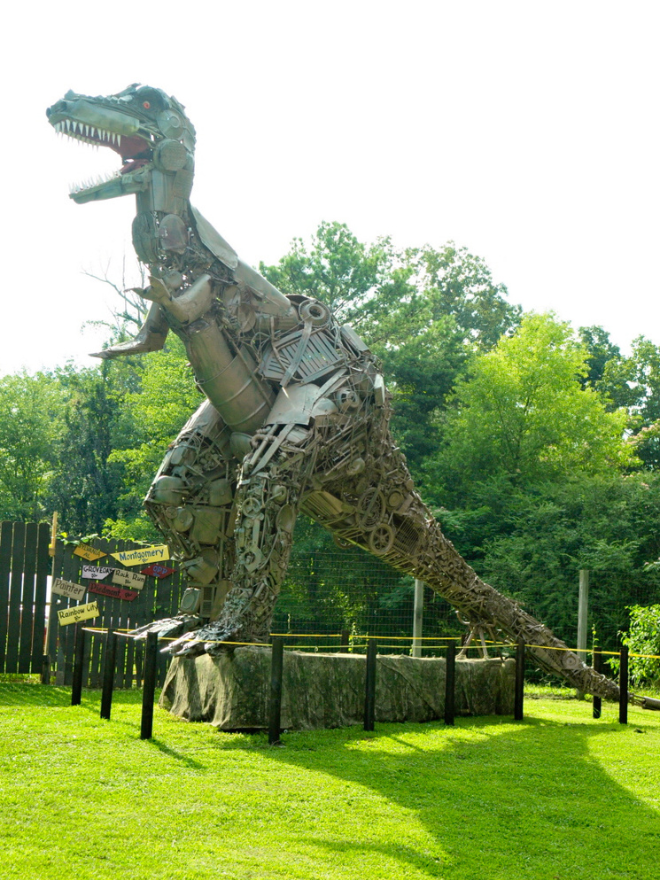 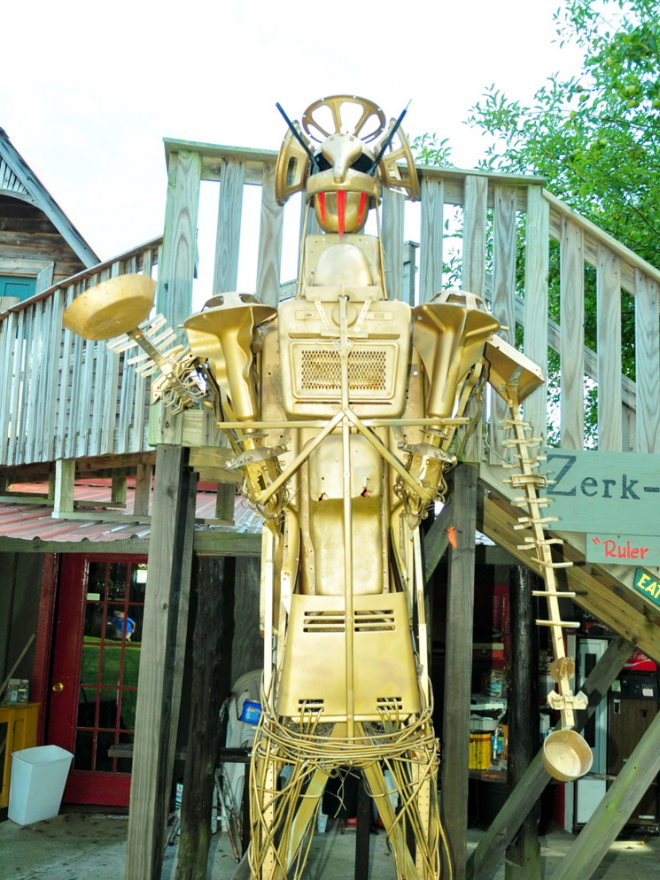 Flip those letters around, and you get Mike Goggans who is an average family man born and raised in Fort Payne, Alabama. Mike is a professional land surveyor at Ladd Engineering. He has a wife, three kids, and eight grandkids. Mike has many artistic abilities other than sculpting. He is a musician and played in a band with his siblings called The Malibou Mountain Band. Mike can also draw, construct, and is a very innovative thinker.

In 1999, Mike built his first creation, a ten-foot-tall robot named Lirpa Anad Nitsud. What’s the story behind this robot’s crazy name? It is actually the name of Mike’s children spelled backwards: April, Dana, and Dustin. Lirpa was built using a variety of pieces. One example is Lirpa’s biceps, which are made of car hubcaps. This crazy creation is what sparked Mike’s interest in junk sculpting, and twenty years later there are nearly thirty creations under Mike’s belt. However, the crowning jewel of Mike’s creations is Junkosaurus Wrecks, a life-sized dinosaur.

Junkosaurus Wrecks: “How many dinosaurs have you thrown away?”

Over a period of ten years, Mike Goggans took on his biggest feat yet: creating a life-sized dinosaur. Junkosaurus stands at a whopping twenty-one feet tall and weighs approximately one and a half tons. He consists of over two thousand pieces of junk. Anything as small as a spark plug to as large as an entire lawn mower. Some other examples of pieces used are garden tools, shop tools, automotive parts, personal care and hygiene items, toys, and cell phones. The life-sized dinosaur was built using thousands of nuts, bolts, washers, and wire. Junkosaurus Wrecks is a must-see attraction on Lookout Mountain.

Other Creations by Ekim Snaggog include: Spongebob, Trashhopper, The Ostritch, Vacumnator, Tee Little Turtle, Bugly Ug, Ole Uncle Ant, Bird is the Word, Junkaroo and Baby Roo, Crane, Zerg-Zing Gugblot: Ruler of Grits and Cornbread, Spido and Baby, Birdie, and Rattle Headed Copper Moccasin.
You can also check out Ekim Snaggog’s new album “Ambition” featuring some of his original songs as well. Find it wherever you stream music. 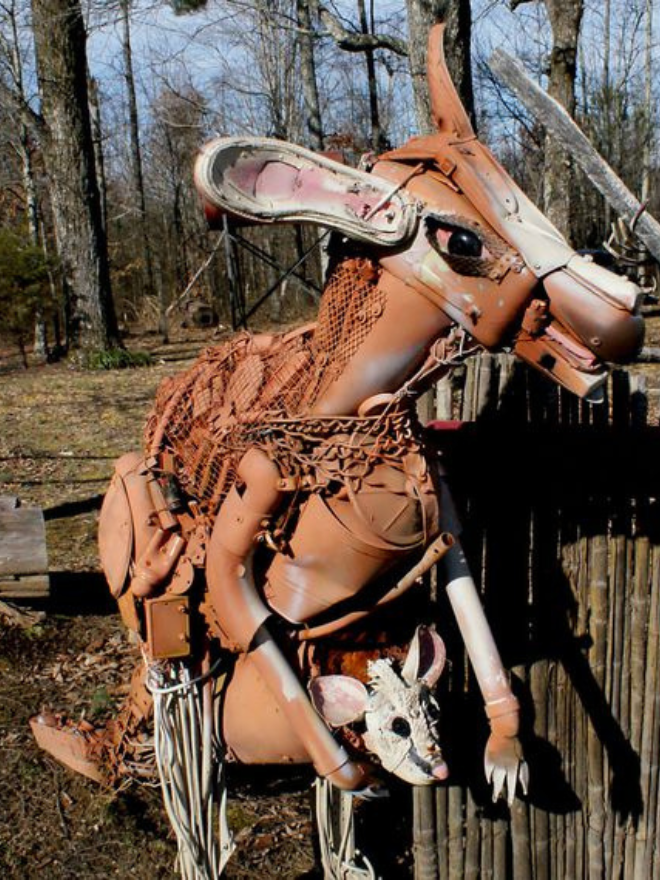 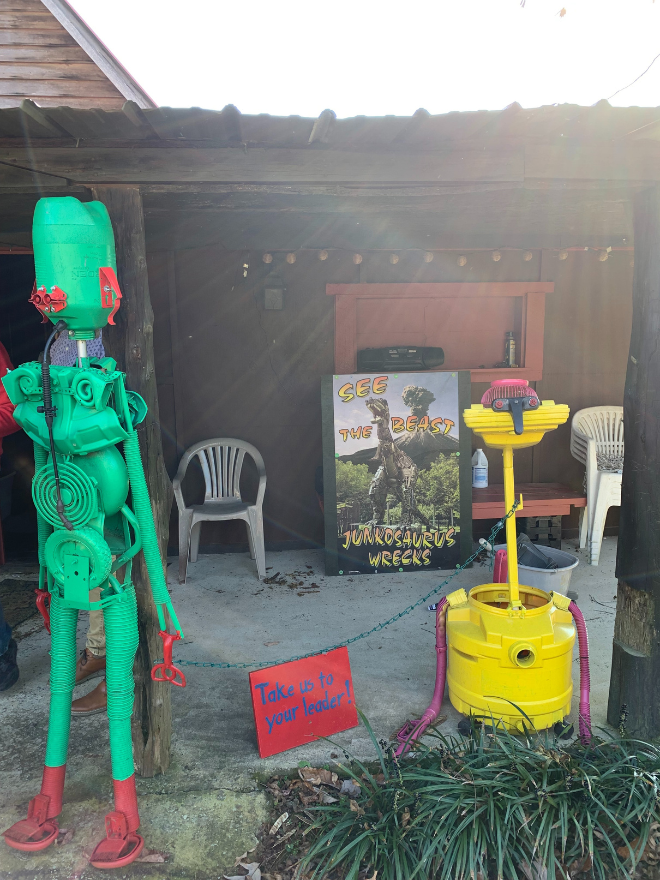 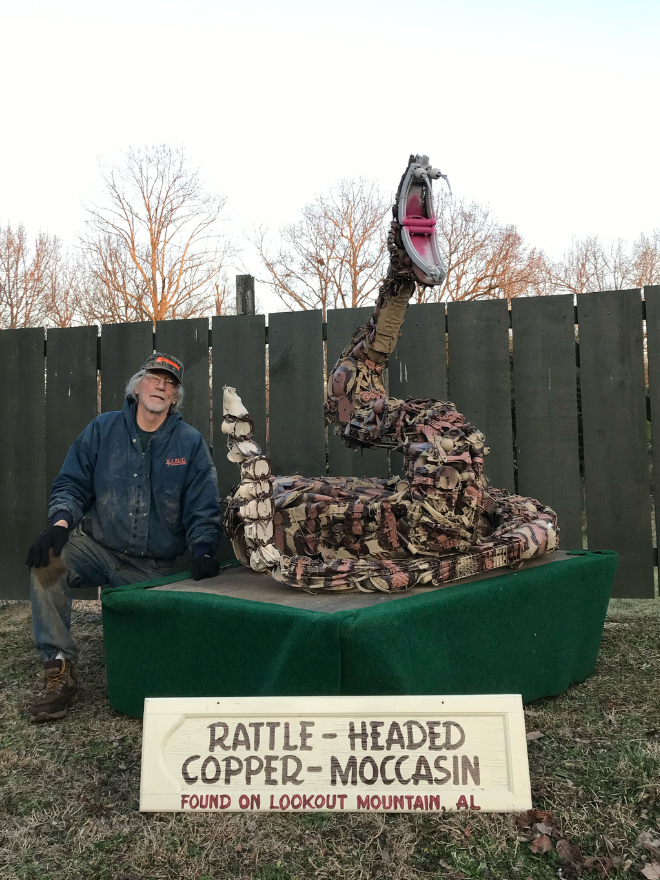 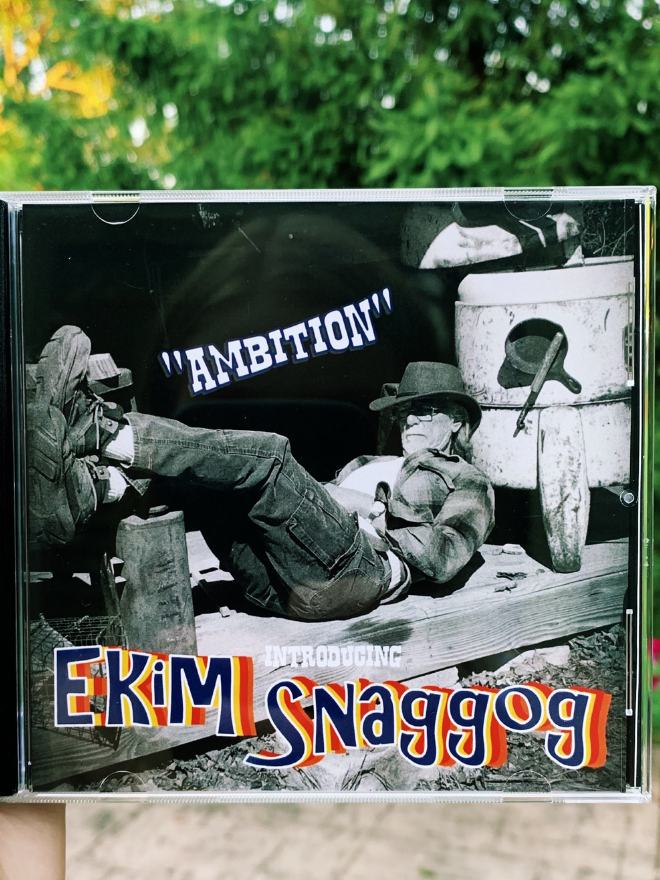 Mike’s creations are currently located at what he calls “The Fischer Lot” (4616 Desoto Pkwy NE, Fort Payne, AL 35967). However, for 23 years Mike’s creations were housed at the unique building beside his lot: The Barnyard. In the past, The Barnyard was a rentable venue that held many musical events. It is now under new management, has a new purpose, and a new name: Barnyard Antiques

Barnyard Antiques is a family owned and operated small business atop Lookout Mountain in Fort Payne. Inside the walls of this rustic building is a treasure trove of good finds. The collection at Barnyard Antiques is 20 years in the making. From antique furniture to small collectibles, they have it all! The new owners are residents of Lookout Mountain and are passionate about bringing The Barnyard back to its former glory. They are hoping to bring back live music and food vendors in the near future. Barnyard Antiques is open Friday-Sunday from 11 AM to 4 PM. They are adding new merchandise every week, so be sure to stop by!

The Barnyard is an attraction that is unique to Lookout Mountain, so don’t just pass it by! As you drive along Desoto Parkway, take the time to stop and walk around Mike’s junk sculpture lot. Maybe take a picture with Junkosaurus Wrecks. Then, make your way over to Barnyard Antiques and browse their amazing collection. Enjoy this special place because I can assure you, you will never find anything like it again! 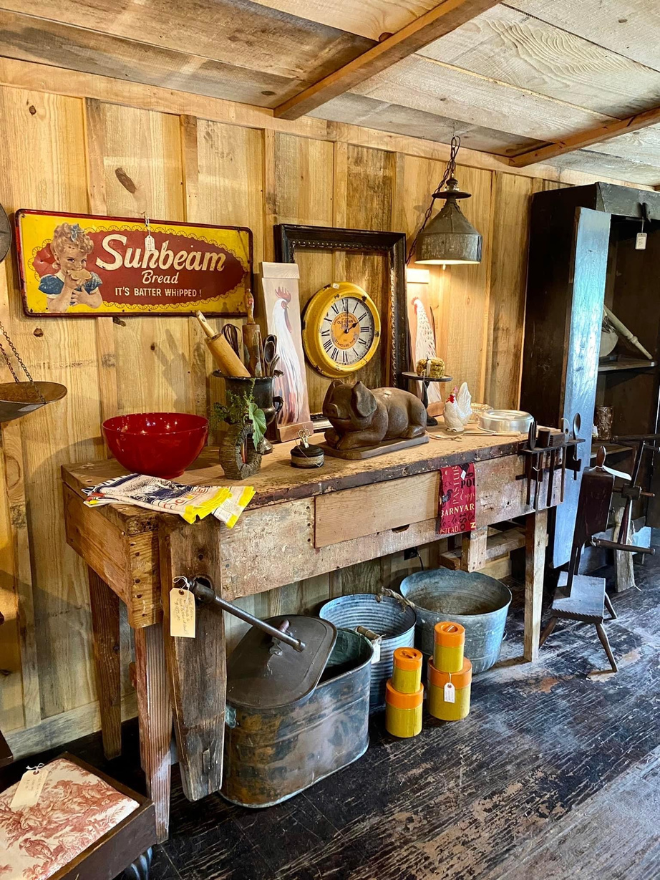 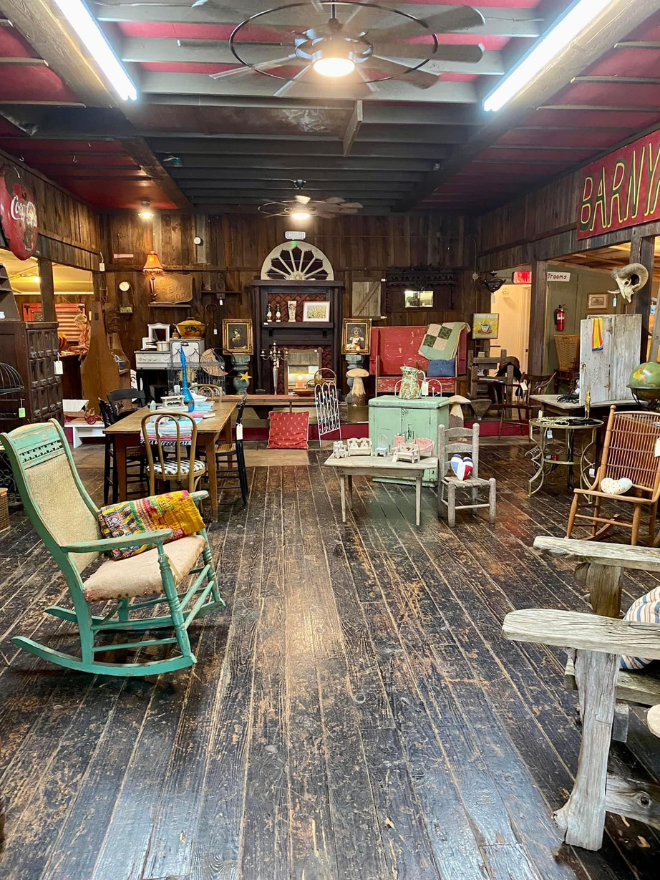 Interested in antiquing? DeKalb County is filled with amazing antique shops! Here are 7 other antique shops to visit while you are here: 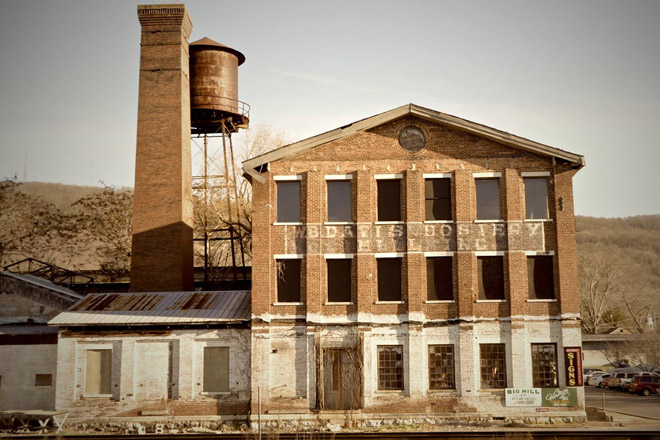 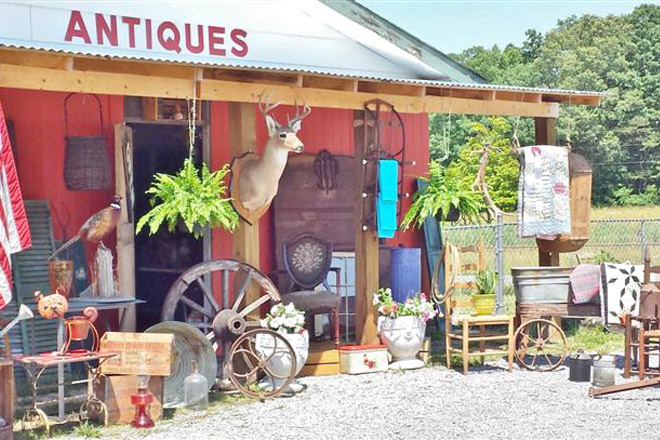 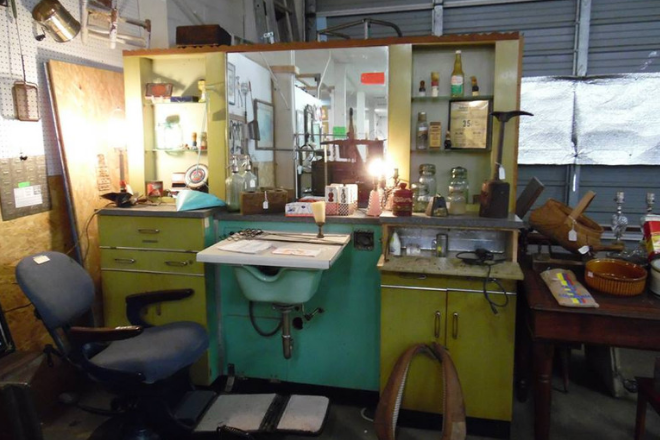 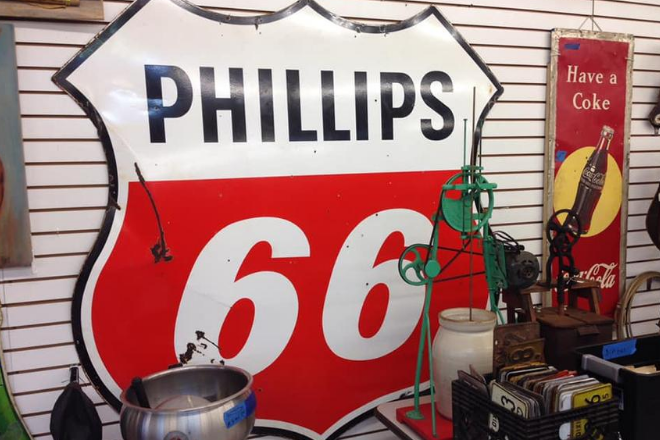 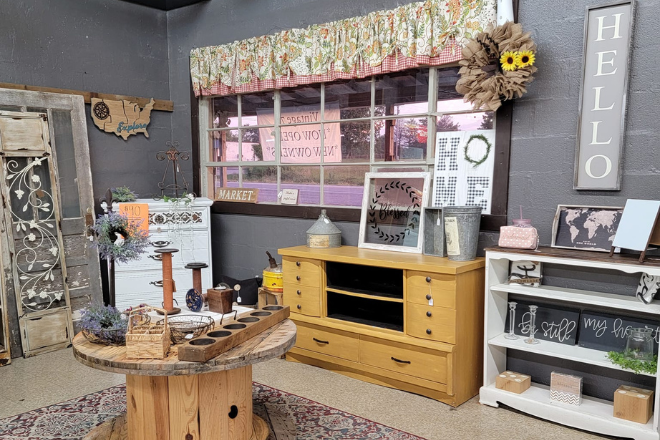 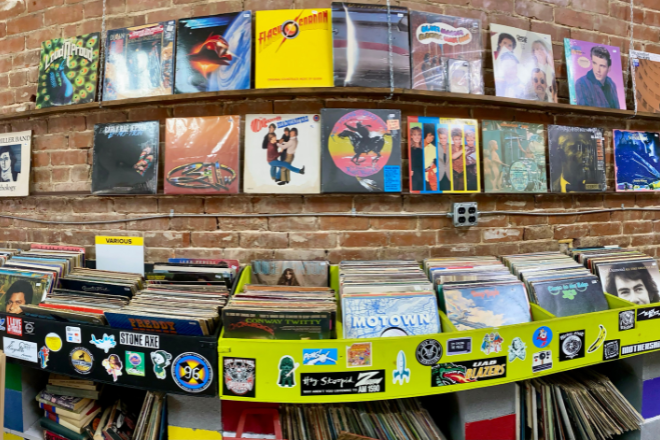 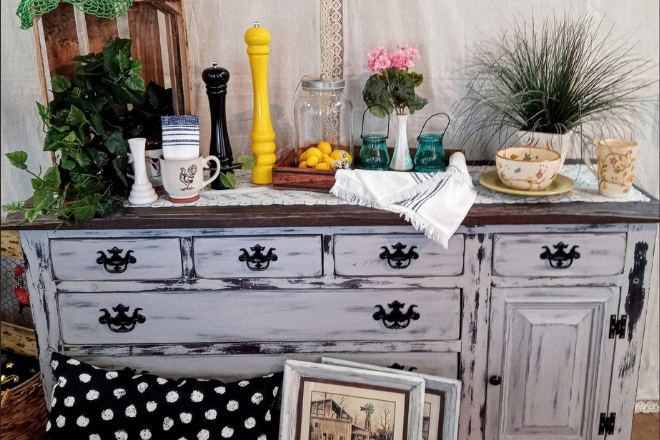 If you would like to try to keep up with Mother Nature and the arrival of her glorious autumn colors here in DeKalb County, you can use the fall foliage prediction map found here.

John Muir said, "In every walk with nature, one receives far more than he seeks." Experience this for yourself while you explore �the ridges, waterfalls, and river in DeSoto State Park and Little River Canyon National Preserve. Pack a picnic lunch and experience rock formations,...

John Muir said, "In every walk with nature, one receives far more than he seeks." Experience this for yourself while you explore ﻿the ridges, waterfalls, and river in DeSoto State Park and Little River Canyon National Preserve. Pack a picnic lunch and experience rock formations,...

What A Day! — Begin a vacation day on Lookout Mountain sipping coffee as you watch the morning come alive. Hike one of our many nature trails, then see the forests from a new perspective as you zip line over the canopy of trees. Paddle...

Fall has officially arrived, but while we are waiting on Mother Nature to catch up, we can explore the area in another way…Just Junkin!
View on Facebook

Everyone loves waterfalls. Standing at 104 feet, DeSoto Falls is one of the tallest waterfalls in Alabama, and one of the most photographed and visited points of interest in the state. There are numerous smaller falls and area trails that allow visitors to view the...