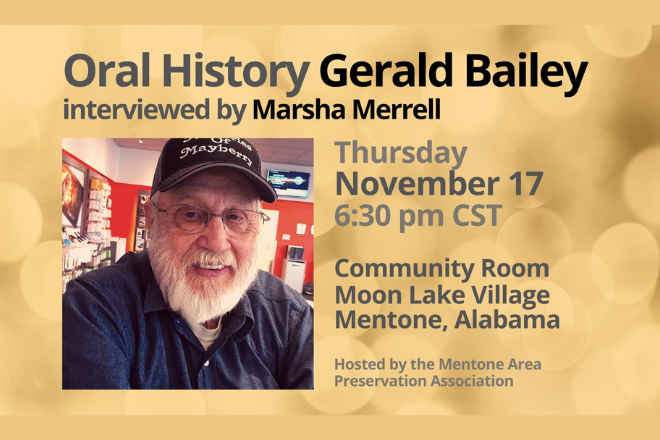 Our second Oral History Night will feature Mr. Gerald Bailey, who will be interviewed by Marsha Cox Merrell. Born in 1940 in his great-grandparents’ home on Cutler Avenue and raised in Mentone, Gerald is the son of the Catherine and F.S. Bailey, and brother of Barbara Bailey Blalock.
The Bailey family owned Bailey’s Grocery for over 30 years. Gerald attended Moon Lake and Valley Head Schools. After living in Rainsville for 27 years, he returned to Mentone in 1991 and married Phyllis Flarity. He has served as a valued member of Mentone’s town council since 2004.
Marsha Merrell is a descendant of Eldridge Jones, an early settler from Georgia, making her a member of the fifth generation of a family who has called this area of Lookout Mountain home. She also attended Moon Lake and Valley Head Schools.
This method of interviewing is traditionally used to preserve important voices, memories, and perspectives. The interview will be recorded on video and posted to MAPA’s YouTube channel for everyone to enjoy in the future.
This event is free and open to everyone.

The event is finished.