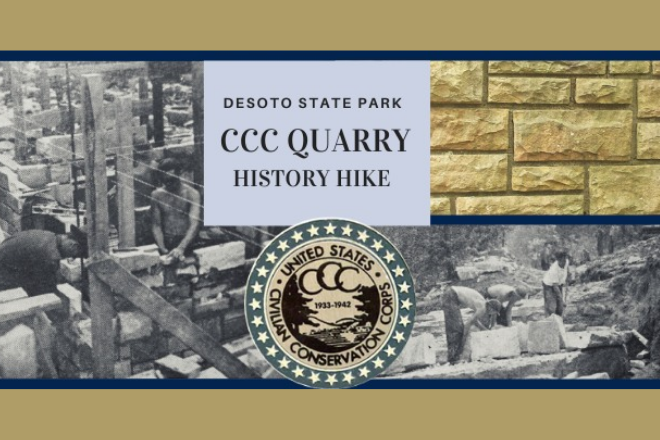 Civilian Conservation Corps History Hike: The CCC Quarry DeSoto State Park, Fort Payne, Alabama The Civilian Conservation Corps was one of the better known and most successful of the New Deal programs following the Great Depression; one that did a lot of good for forests, recreation, and the men for whom it provided short-term jobs. Between 1933 and 1942, an average of 30 camps operated across Alabama. CCC boys helped fight fires, reforest lands, protect the state’s then newly acquired national forests and build roads and recreational facilities in Alabama State Parks. In celebration of DeSoto State Park’s 83rd Anniversary of its dedication day in 1939, join DSP Staff & volunteers on a moderate hike to the CCC Quarry. Learn how the Civilian Conservation Corps constructed the original structures that you can still see in the park today. Moderate hike along mountainous terrain, some rocky terrain. Approximately 2 miles round trip. DeSoto State Park-Fort Payne, Alabama. Meet at Country Store & Information Center on County Road 89 Free, pre-registration is required so to know how many to expect. Hike is open to ages 8 to adult. Email Brittney.Hughes@dcnr.alabama.gov for more info or to pre-register.